Living Our Tagline - "Togther for Progress" 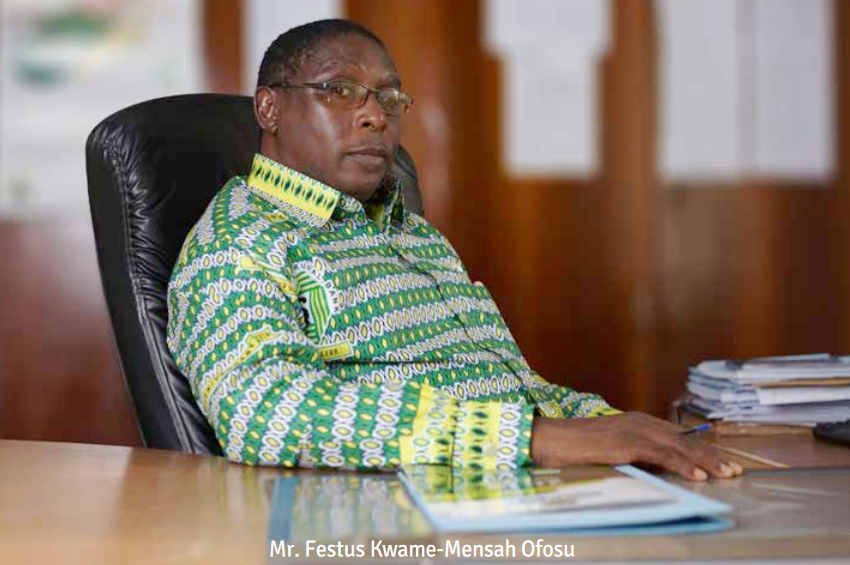 The spotlight is on South Akim Rural Bank - another brand within the Rural Banking fraternity known for excellence. The Rural Banker sat with Mr. Festus Kwame-Mensah Ofosu (FKO), General Manager of the Bank.

TRB: Thank you for welcoming us to Nankese. Can you please tell us a few things about yourself (Education, family etc.)

FKO: My name is Festus Kwame-Mensah Ofosu from a family of nine (9) siblings. I am the fourth child.  I started Primary One (1) at Kadjebi R/C Primary in the Volta Region in the 1964/65 academic year. I continued Primary Two (2) at R/C Primary at Lolobi Kumasi, which is my hometown. Due to family relocation, I continued Primary Three (3) at St. Francis Training College Demonstration School at Hohoe, where I completed Primary 6. With further family relocation, I ended up at Kete-Krachi, where I attended Bunda L/A Middle for two (2) years, sat for, and passed the Common Entrance Examination at age 13 and entered Secondary School at Bishop Herman College (BIHECO) at Kpando in September, 1972.

I was in BIHECO for seven (7) years; that is five (5) years for the Ordinary Level and then and two (2) years for the Advanced Level. I completed my Secondary Education in 1979. I entered the University of Ghana (UG) in October, 1979 and completed in November, 1982 with a combined Geography and Economics Degree. I did a two (2) year National Service with the Institute of Statistical Social and Economic Research (ISSER), UG and proceeded to the Bank of Ghana as a Manager Trainee for Rural Banks. I was part of the first Manager Trainees for the Rural Banks. I have attended various Management training programmes at:

I am married to Mrs. Joan Abla Ofosu and we are blessed with three (3) children, namely Mary Shireen, Ellis Kwesi Afriyie and Wisdom Sena.

TRB: At what level did you start work with the Bank?

FKO: After initial training at the Bank of Ghana (BoG) Training School, I was sent on attachment at Lower Pra, Amenfiman, and Brakwa Breman Rural Banks.I was then posted to South Akim Rural Bank Ltd by the Bank of Ghana in August, 1985 as an Assistant Manager in charge of the Bank with a staff strength of seven (7). I have since been in charge of the Bank for the past thirty three (33) years. From the level of an Assistant Manager, I have risen through the ranks to the grade of General Manager.

TRB: When did you become General Manager of the Bank?

TRB: What are some of the landmark achievements of the Bank under your stewardship?

FKO: From a single branch in 1985, we currently boast of eight (8) branches in the Eastern Region and also from a Staff strength of seven (7) to one Hundred and Eighty Six (186) members of staff. The Bank can boast of being the highest deposit holding Rural Bank in the Eastern Region since 1995. The Bank has won several awards such as the Best Rural Bank in 2015 by the Association of Rural Banks-Eastern Regional Chapter and has been a member of the Ghana Club 100 since 2002. In 2009, South Akim Rural Bank Ltd was ranked 21st at the Ghana Club 100 and the best Rural Bank for that year. In December 2016, the Bank was rated as the Best performing Rural Bank per the ARB Apex Bank ratings.

I am also happy because under my leadership, the Bank continues to support communities and individuals in our catchment areas. In the year 2016 for example, we awarded scholarships to 12 candidates in various Senior High Schools. That brought the total beneficiaries of our scholarship scheme, since we begun the programme in 2003 to 182 candidates. Again, under our corporate social responsibility (CSR) project, the Bank has acquired a land for the construction of the Nankese Senior High School. The Bank has invested an amount of GH¢440,000.00 in the construction of the School so far. The Bank also spent an amount of GH¢58,390.00 on CSR in 2017 alone.

TRB: What has been your relationship with staff, management and board of the Bank over the years?

FKO: Simply put, my relationship with every one over the years has been very cordial.

FKO: If given the chance, the action I would take again will be the decision on strong liquidity management strategies to sustain the bank. Further, I would continue to ensure strong discipline and self-control. Finally, I would continue to avoid excessive expenditure and acquisition of assets.

FKO: My advice to my fellow GMs and CEOs would be that we establish a long term investment in our customers, staff, shareholders and other stakeholders to help sustain the businesses of the RCBs.

TRB: Any advice for your would-be successor?

FKO: My advice to my would-be successor is to uphold the South Akim Rural Bank culture, follow the succession plan and ensure discipline and self-control in all areas of the management of the Bank